In the last 60 years, Amway has evolved from two guys selling soap from their basements to a multibillion-dollar global enterprise with more than 1 million independent business owners worldwide selling hundreds of nutrition, home and beauty products. Jay Van Andel and Rich DeVos in the home basement where Amway began.

That’s the Amway story in one sentence, but that sentence encapsulates so many other stories. Stories of hope, hard work, endurance, failure, resilience, discovery, research and sometimes just plain luck.

As part of our series of blogs marking Amway’s 60th Anniversary, we asked several people with key roles in those stories to distill Amway down even further: As the company looks back on 60 years and looks ahead to many more, what one word or hashtag comes to mind?

Tracy Loughlin, who has traveled the world in her role as a senior training and development specialist for Amway, offered #whataride to describe her 39 years with the company. While Judy Hoover-Brown said it’s been a #blessing to work at a company where many other family members have worked, too.

“The Hoover family has enjoyed 199 years of service dedicated to empowering our Amway Independent Business Owners (IBOs) to help others live better lives,” she said. “I am blessed to come into a job I really love, because I know that I can make someone’s life better every day.” 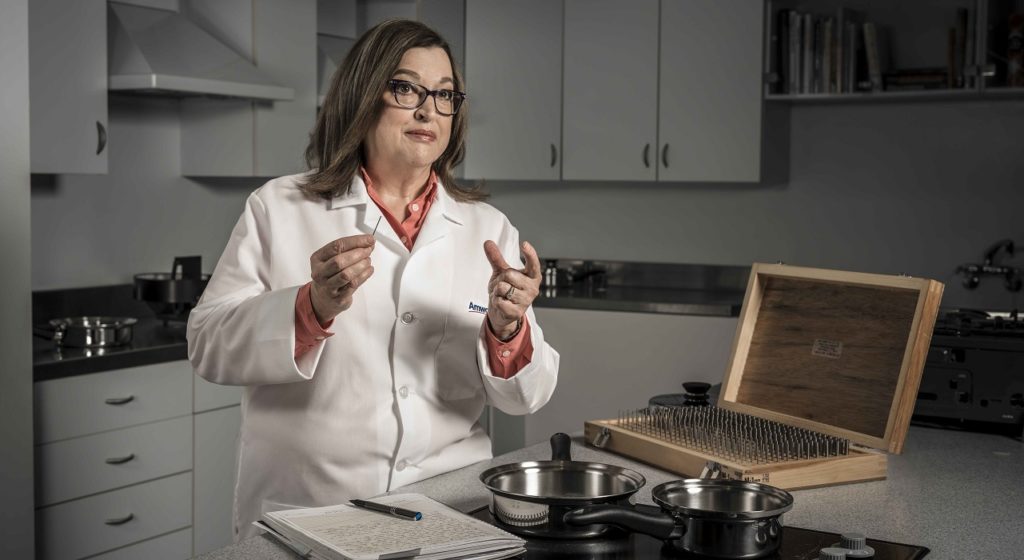 “Amway offers women around the world a chance to work either at Amway or as an entrepreneur,” Sue said. “When I was a young woman looking for work in the sciences, I faced blatant discrimination. Amway hired me and I thrived here.”

Jaime Gonzales, a plant manager who has worked for Amway for 33 years landed on #value.

“Amway has so many positive attributes, but one that I appreciate the most is their contribution to the community and the world,” Jaime said. “Amway stands for something beyond simply increasing profits. Our corporation provides products to the world to help people live better lives—from employees and IBOs to consumers. I am privileged to participate in adding value to the world every day.”

Senior Business Analyst Mike Porter, who has worked at Amway for more than 40 years, while his father worked there for several years before him, chose #human. He said the founding families’ corporate values are “not just words.”

“Freedom, Family, Hope and Reward have been demonstrably verified through the lives, communities, states and whole countries touched (by Amway),” he said. “The vision, inspiration, influence and determination of the Founding Families accomplished so very much for so very many lives on a profound and phenomenal scale.”

It may not be surprising that Amway Co-chairmen Steve Van Andel and Doug DeVos chose the same hashtag to describe the company founded by their fathers, Jay Van Andel and Rich DeVos: #opportunity.

Doug remembers consultants many years ago advising Rich and Jay to focus their recruiting on only those with professional sales experience. The advice was soundly rejected. “They asked a simple question: Who do you want to leave out?” Doug recalled. “The cause of Amway was to make opportunity available to everyone so that people from all different backgrounds would have the same opportunity to have a business of their own.”

Len Iakiri, general manager of Amway Canada, also chose #opportunity. He cited similar reasoning, but also looked at it from an employee perspective. “It’s an opportunity for anyone who touches it,” he said, “to be a part of something really special.”

Those are along the same lines as Amway North America Managing Director Jim Ayres, who offered #mission.

“The whole company is built around the idea of helping people achieve economic freedom, wherever they are in the world, whatever political system there is,” he said. “Regardless of their ethnicity, their religious beliefs, their gender, their educational background, any of that.

“We’re on a mission to help them have the ability to reach their goals, their economic freedom wherever they are and whoever they are. To me that’s the essence of what Amway is about.”

“We’re helping people help themselves in all ways—from dietary supplements to beauty to skincare to the environment to their pocketbook,” he said. “You’ll find the ones most successful are those who are products of the product. That’s what drives business. Sometimes we forget how simple it is.” “We have a unique ability to connect people’s bucket list dreams and goals to our products,” he said. “No one else does that like us in a connected economy. When we deliver great experiences, it enhances our relationships, builds trust and gives us permission to take people to new destinations.”

Scott looked ahead to expanded products and potential in an ever changing marketplace and chose #justgettingstarted.

Amway’s new CEO Milind Pant looked back to Rich and Jay for his hashtag, which he has been using across Twitter and Instagram: #biggerandbetter.

“This is a phrase that Rich and Jay used to use when talking about the growth possibilities for Amway and ABOs when working together in partnership,” Milind said.

“We are focused on strengthening this partnership today, enabling ABOs to build #biggerandbetter businesses by creating personal brands online and offline around their passions.” When you look back on the last 60 years of Amway and consider what the future holds, what’s your hashtag? How would you describe Amway in one or two words?

Post your hashtag comment below and be entered to win a 15.75-oz container of Nutrilite™ All Plant Protein Powder. Make sure to read all the blogs marking Amway’s 60th Anniversary to see other opportunities to win a prize from the Amway through the Decades Giveaway*!

Growing up in the Amway business, Karen Martin had a front row seat watching her parents fulfill their dreams of entrepreneurship.